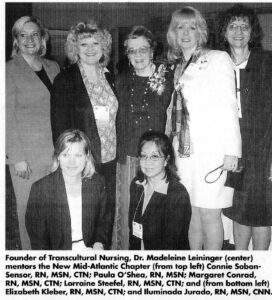 In the early 2000s, I was fortunate to study in an MSN program at Kean University in Edison, NJ, where Dr. Leininger’s Theory of Culture Care Diversity and Universality took center stage.  Under the tutelage of Dr. Dula Pacquiao, students learned how to apply the theory to nursing practice.  We were in awe when given the opportunity to take a summer study course with the author herself in preparation for the TCNS certification exam.  Imagine actually meeting the nurse who lived among the New Guinea natives for her underlying research!  Little did I realize the extent of her influence on my nursing practice in the years ahead.

Working as a senior staff writer for Nursing Spectrum at that time, I asked Dr. Leininger for an interview.  Although some nurses may not have valued an article in a non-peer reviewed journal, she was very happy to share her ideas in a national magazine that easily reached frontline nurses as well as those in academia, first with the interview article, next, an article she wrote about her journey through cancer.  Our collaboration on the articles, allowed us to become “long-distance friends.”

Recently, I came across several cards and letters that Dr. Leininger sent to me.  Reading each one, I felt humbled as she thanked me for “my active interest and support to advance nursing”, saying that she was “so appreciative of my efforts to make TCN known . . . as this is so needed.”  She added newsy events about the dissemination of her work; the dedication of the archival collection in Boca Raton, Florida; the publication of the second edition with Marilyn McFarland, PhD, RN, CTN, of Culture Care Diversity & Universality: A Worldwide Nursing Theory; the professional documentary film based on her career in transcultural nursing, and the establishment of the Leininger website by Dr. John Vanderlaan.

In her recounting about her post-cancer health, she showed no trace of complaining; rather, Dr. Leininger reported in 2008 that “her health is remaining good, but she needs to decrease her traveling (although she had just been to the Philippines) “and is looking forward to the dedication of the Archives in Boca Raton.”  “I’m recovering from my May surgery (2008) that took the “sys” (?) out of me, but I’m doing okay,” she said.  In 2009, she noted that she was beginning to tire easily at age 83 (the number is written over, so it may have been 85).  She wrote that she would have to make changes to her always busy schedule; however, she noted that she was writing the card at 4 a.m.  At Christmas, she said, “It’s been a full and great year. I am grateful for all transpired and my health remains fairly good.”

Filled with questions about how I was doing; congratulating me on my DNP, asking about my family, and telling me about her own immediate and extended relatives, these correspondences demonstrated her warmth,  caring, and attention to detail.  On one note, she humorously wished me a Happy St. Patrick’s Day, writing, “I don’t think you got any Irish blood in you, right?”

Reflecting back,  I’m proud to say that I was able to have a small part in disseminating her theory.  With each position I held along my nursing career. I incorporated TCN teaching in my practice; finally, just before retirement as nurse educator at Rutgers University Correctional Health Care, publishing a peer-reviewed paper on cultural humility, an active concept to drive correctional nursing practice, which highlights her theory.  It’s been an honor to know this legend in nursing,