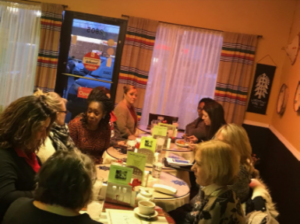 As a new networking chapter of the Transcultural Nursing Society, it has been a most wondrous year. The Fort Wayne chapter has been engaged in various activities to assist members to learn about the diverse ethnic communities that live in Allen County. One of our objectives is to expose members to various ethnic cultures, and glean as much as possible from the people. The goal is to have members who are and feel more competent in providing culturally appropriate care to the clients/patients they serve.
We were privileged to have speakers representing Guatemala, Burmese refugees, and even a World War II survivor who arrived to this country as an immigrant and later became a U.S. citizen. We were in awe, and humbled, as we listened to their stories of struggle and strength to endure to most unfathomable experiences. My take away in this is the human spirit is the same, regardless of the ethnicity. 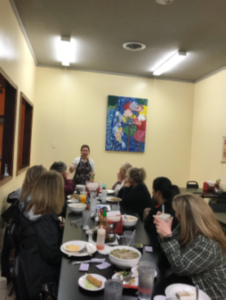 We also tried a different platform to learning. We approached various local ethnic restaurant owners and inquired about the possibility of hosting an educational dinner outing at their establishment. The educational dinner outings consist of the owner or someone from the establishment to dialogue with the group regarding their cultural beliefs and values, while members of the chapter ask questions and enjoy their paid meal.
For our first educational dinner outing, chapter members attended the educational dinner outing at Queen of Sheba, which serves Ethiopian cuisine. Participants looked forward to learning and trying exotic food. We enjoyed the ambiance and the very flavorful strong aroma of coffee beans roasting over a fire as our palates eagerly waited for the delicious food. I was shocked to learn the calendar year is not the same as it is in the United States. Ethiopians observe the Julian calendar, which is seven years behind when compared to the calendar we observe in the United States. The women in the Ethiopian culture take their father’s first name as their last name and keep that last name even after they wed- this is something healthcare providers should be aware of. For our second educational dinner outing, we were thrilled to learn about the Vietnamese culture. Banh Mi Pho Shop owner opened their doors to us. We were amazed at the beauty of the pictures that covered the walls. The food was so delicious, especially the beef ramen, passion fruit tea, and scrumptious egg rolls. My biggest take away from the Vietnamese educational dinner outing was learning that trust plays a big part in the patient and healthcare provider relationship, which also includes using interpreters.   Healthcare providers need to show they truly care for the patient by first making “small talk” instead of delving directly into an assessment of what brings the patient in. Healthcare agencies that are required to provide trained certified medical interpreters for limited English proficient (LEP) individuals need to be aware and understand Vietnamese clients/patients prefer to have family members interpret rather than using an interpreter provided by the agency or hospital.  If the patient/client does not know the interpreter or feels the interpreter is not being sincere or trustworthy, the patient/client will refuse to provide information that may be vital for a correct medical diagnosis.  All healthcare providers must be educated on this crucial information.
We are currently in the process of procuring other venues to educate our chapter members since the space in certain ethnic dining establishments is rather small. As the summer draws to an end, we excitedly look forward to the bountiful adventures that await us in the remainder of the year in our quest for transcultural knowledge. 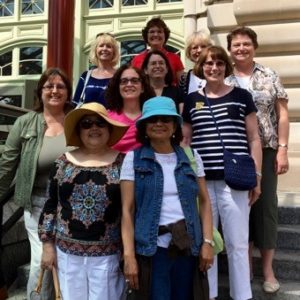 beautiful sunshine, excellent views of Liberty Island and Ellis Island, as well as panoramic views of New York City during their Ellis Island Meet Up on July 11, 2016. After everyone took the State Cruises, LLC ferries from either Battery Park in Manhattan or Liberty State Park in New Jersey, they

met briefly with Dr. Marianne Jeffreys who helped coordinate the day’s activities. Then, participants enjoyed a Park Ranger tour of the Ellis Island Immigration Museum, which included very interesting information such as the largest number of immigrants processed in one day (over 11,000), the language difficulties that immigrants encountered, the types of questions they had to answer, the various tests and medical inspections that were administered to determine their entry into the United States, as well as explanations of the various rooms and displays within the museum.  During the tour, one member was asked to participate in a Q & A session with the ranger. The questions that he asked were similar to what immigrants would have been asked to enter the United States. After that interaction, the member earned a Junior Ranger Badge. Following the museum tour, members and their guests enjoyed a lunch in the picnic area during which a short discussion about future chapter events occurred. Several participants also toured the museum, exploring exhibits in more depth, watching movies, and/or listening to stories of  Immigrants’ journeys.  Then, they took part in a Hard Hat Tour of the Ferry Building, hospital, morgue, contagious disease wards, offices, housing, and maintenance facilities. Following the Hard Hat Tour, participants had a short photo session that was followed by a debriefing meeting. After an excellent day of networking and learning a great deal about what took place on these historic grounds, which are now part of the National Park Service, participants again boarded the ferries to begin their journeys home with great enthusiasm about attending future Meet Ups.